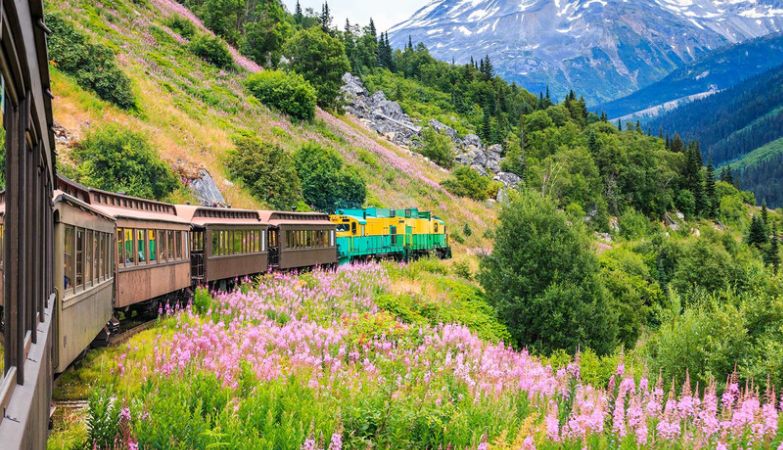 There are many ways to explore the world, but one of the best and perhaps the most “suggestive” is the train. The means of transport that revolutionized the last century has, in recent decades, given way to the plane, whose costs are increasingly reduced. This circumstance has not, however, managed to undermine the magic of traveling by train: millions of people, even today, continue to prefer this means of transport to others for various reasons. Reasons of a practical nature, others purely emotional: traveling by train, in fact, is not only a comfortable and economical solution, but also a unique and authentic experience that is not in the least comparable to a flight.

We have selected for you the 10 most beautiful panoramic itineraries in Europe. Get in the carriage and have a good trip!

It starts from Levanto towards La Spezia on the train that stops in all 5 villages of the Cinque Terre (Riomaggiore, Manarola, Corniglia, Vernazza, Monterosso al Mare). A path between colorful houses, cliffs shaped by the wind and glimpses of the crystal clear sea of ​​indescribable beauty will allow you to discover this enchanted corner of Liguria. The villages are part of the Cinque Terre National Park, declared a UNESCO World Heritage Site in 1998: here trekking enthusiasts can follow suggestive paths, while sea lovers can snorkel, scuba dive or practice other water sports.

Alpine area: a 61 km long route that connects Tirano to St. Moritz and is part of the UNESCO World Heritage List. From the panoramic carriages you can admire incredible natural scenarios made up of meadows, valleys and streams, traveling through 55 tunnels, 196 viaducts and slopes up to 70 per thousand, for the most spectacular Alpine crossing!

Board the yellow train and set off on a journey through the Cerdagne landscapes. The circuit between Latour-de-Carol and Villefranche-de-Conflent uses the highest-altitude railway line in France. It is one of the most spectacular rail routes to take in the Pyrenees and passes through mountain landscapes of extraordinary beauty. You will experience the thrill of whizzing on two vertiginous bridges – the Gisclard suspension bridge and the Séjourné viaduct – and 19 viaducts, admiring the backdrop of cliffs and characteristic villages of the region.

Imagine a real luxury hotel on rails and live a timeless travel experience on the Transcantabrico! It connects the city of San Sebastian in the Basque Country with Santiago de Compostela in Galicia and, being a narrow-gauge train, manages to enter the most beautiful natural corners of northern Spain. The scenery that you can watch from the window unfolds around mountains, valleys and cliffs. Many of the places where you can stop are part of the UNESCO World Heritage list: the Altamira caves, the Picos de Europa national park, the pre-Romanesque monuments of Oviedo, just to name a few.

Next station: Porto to get to Pocinho, Portugal. Enjoy one of the most picturesque railway landscapes in Europe, along a circuit that follows the course of the Douro. Fun fact: the river owes its name to the waters that glisten like gold and the valley it flows through has been designated by UNESCO as a World Heritage Site. The train is one of the most spectacular ways to explore the valley, among colossal rocks, towering cliffs and terraced vineyards that climb the hills. If you are a lover of wine tourism, you cannot fail to stop in Pinhão: let yourself be enchanted by the beautiful “azulejos” that cover the facade of the station, one of the most beautiful in the country, and stop in the “quintas”, the typical cellars, to taste the best varieties of Porto in the region.

Harry Potter fans, all aboard the Hogwarts Express! The train of the saga really exists, but in reality it is called Jacobite and runs from Fort William to Mallaig, along the famous West Highland railway line. It is a steam train that snorts and rattles and will give you fantastic views of the majestic landscapes portrayed in the films: rugged hills colored by the green of the forests or the red of the moors and shaded by the blue of the sea dotted with islands and fjords. The most extraordinary part of the journey is the passage on the Glenfinnan viaduct: 21 majestic stone arches on which the train runs in curves for moments of pure emotion!

Another line along a river, the Neretva, this time all Balkan, in Bosnia and Herzegovina, is the one that connects Sarajevo to Mostar and which has the reputation of being among the most scenic train routes in Europe. During the journey you will have the opportunity to contemplate all the beauty of nature from the window: the train climbs steep mountains, enters long tunnels to emerge a short distance from the sparkling waters of Lake Jablanica and then skirt the emerald green waters of the river.

In the heart of Norway, the Flåm Railway is the line that runs along the fjords and, in 2014, was named the most beautiful rail journey in the world by Lonely Planet. It is one of the steepest lines ever built (with a 5.5% gradient for 80% of the trip). It is a winding route from Flåm to Myrdal, on which you will encounter breathtaking panoramic views of the most unspoiled corners of Norway, from snow-capped peaks to picturesque villages, from green pastures to valleys crossed by rivers and waterfalls, such as that of Kjosfossen, one of the main attractions tourism in the country. Adrenaline lovers will be able to complete the journey in reverse: this time the slopes will be downhill, for an unprecedented high-altitude adventure on the tracks!

The oldest mountain railway in Europe awaits you! This is the Semmering line (named after the mountain pass of the same name), built between 1848 and 1854, which starts from Gloggnitz and arrives at Mürzzuschlag, winding through the Austrian mountains and crossing 16 viaducts, 14 tunnels and more than 100 bridges. Climb aboard and enjoy the view: a landscape of fairytale forests and lush clearings, as beautiful as it is varied, which led to the railway line being declared a UNESCO World Heritage Site in 1998. Fun fact: it took over 20,000 workers to build the railway which were engaged for 6 years!

It is a magical place to visit at least once in a lifetime and you can do it comfortably by train! Rocky walls, springs and pine forests with dark fronds that intertwine high and dense: these are just some of the breathtaking views that will fill your eyes on the route from Offenburg to Lake Constance. If you want to live an even more suggestive experience, you can decide to cross the Black Forest on the Wutachtalbahn, the oldest steam railway in the country, between black carriages and coal dust, for a journey back in time, in Germany at the end of the 19th century. .

China’s $200 Billion Underwater Train To The US